Have two pictures of Tiny, looking at him without being cheered up is not easy: 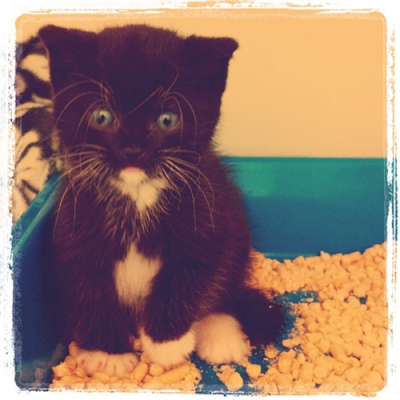 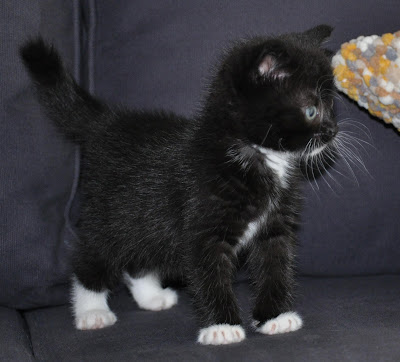 I definitely suck at updating anymore. I partly blame my need to complain about stupid clients/PDSA clients/stupid PDSA clients/clients in general. I love my job but I hate people. Nothing new there I guess. But it gets boring after a couple of repetitions

I'm halfway through my insane 12 night shifts in a row. For which I have no one to blame but myself because M. would never put me on the rota for more than five in a row without me asking for it. And just because twelve 15h+ nights one after the other weren't enough, I decided to to do a couple of them not in my usual practice, but a place that is usually much more busy.
Madness, pure and simple.

Sleep deprivation makes me babble more than usual. So let's see if I can use that to update some more.

I have pictures from Gibraltar I'd like to post, some rambling about my camera, some babbling about blisters (on blisters on blisters) and likely a lot more that I just can't remember right now.

But the one thing I have to post about, is how much my Roomba amuses me.
It does a little fanfare when it's finished cleaning! It gets stuck in silly places and calls for help!
I've had the thing less than 24h but I can already tell I'm going to regard it as a pretty dumb but slightly useful pet.

I'll just have to write an entry about a bit of what's going on at the moment now - however incomplete it will be - because otherwise I'm most likely never ever going to post again. And we don't want that, right?
I *am* religiously reading my DW and LJ reading pages every day, I'm just not talking. Something I'm saying in every entry I manage to force out, I know.

Not touching on a lot of things I've done since February (Really? How is time passing this quickly?), but since the /-Treffen (Which was also more than a month ago? Argh!) I've done a couple of working marathons - six nights of work, one day off, repeat - because I'm a crazy person and like my job a lot, even if I'm constantly complaining.
And after that I started my crazy month of June.

Wow, that was ... wordy. And rambling. Business as usual I guess.

July is looking to be fairly quiet in comparison. Only a hen party (Why this obsession with weddings, Brits? I don't get it!), some random hiking in the New Forrest and that's it. Until I start to get bright ideas again.
But since I've just ordered a Roomba (I shouldn't look at Groupons. But in my defense, I need a new hoover anyway and the reduced price is pretty much what I would pay for a mid range Dyson too. And it's not even that much more than the ubiquitous Henry) one of my bright ideas will probably be to watch the floor being cleaned. And I'm ok with that.

Of course I'll not notice the bit of Cornflake that dropped into my coffee until I'm trying to drink the last bit of it in one go. I might stop harking like a cat coughing up a hairball soon, but I give no guarantees.

And now that the mental plug of that last entry is gone (I do that all the time, mentally working on an entry and then not being able to post about anything else because my brain is still working on that other thing.) I can go back to more regular brainless blathering.

Recently, while watching all of The West Wing, my DVD player (it's quite old and temperamental -that's why the media centre/streaming pc is an actual plan instead of a geeky fancy) absolutely refused to play one episode, so I got out the CDs with the .avis

kriski gave me years ago.
I know I watched nearly the whole series of those then, but *how* is a mystery to me. The difference in quality is amazing.
Now I feel the need to go and search for some Star Trek TOS that should still be around here somewhere on video tapes. Just to appreciate the improvement from then.

I also had a look at the WW fanfic. Looking back at a fandom years after it closed is always interesting to me and seeing some of the stories with the knowledge of later seasons is quite funny. Doesn't make the good ones bad though.
*goes back to haunting archives*

I *could* be doing the online cpd thing I've been doing the last few days, but as this weeks topic is very internal medicine based I just don't care enough.
So, time for a rambling 'What's going on in my life' post.

As I said, this is more bragging about how good my life is than anything else, I'm aware of that. But I needed something to do and all this has been bouncing around in my head taking up space for a while now.

So, LJ had the writer's block prompt of "What's the origin of your username? If you could change it to anything else, would you, and what would it be?" and since I'm falling back into the habit of not posting, I'll try to answer that one.

I've had this username since the very first time I had to create an account online. 1998 or thereabouts. GMX had this social forum/chat thing called GiMiX and when I wanted to register I tried ever Discworld related name I could imagine. Most were already in use. Until I found this one. Only to later realize that this was because the guy in the books is actually called Ridcully.


But I liked the name. It serves as a reminder how ridiculous I can be. And since its a misspelling, it was mostly available in every new place I wanted to create an account. So it stuck.
And I'm sticking to it. By now it is the online *me*.

I wouldn't change the name for anything. I do have a couple of accounts under the name of alex_t, mostly things that might be connected with my real name since I've tried my best to not make Ridicully come up on any searches for my real name, but that's the extend of it.
Ridicully I shall stay.

Honestly. I don't mind euthanasias generally and all of them were perfectly justified but enough is enough.
It's mostly a combination of bad luck and the time of the year (people don't want to face saying goodbye to beloved pets before christmas) but of the last seven patients I saw only three made it out alive (with two of those relatively likely to die before the week is over too). And if we figure in my colleague, we go up to a 70% death rate.
Can I have a cat with an abscess, a broken leg or even a rta again?
Something I can do more to than just stop any suffering?
Pretty please?

Reflecting over the past decade would take too long for this entry. Those were *busy* ten years.
Now I'll eat the last of the mince pies and maybe knit some more. (I've started knitting because motorcycle repairs in <0° temperatures just aren't fun. Oh hell I've got *hobbies*...)

One of sister2's presents to me was an Adipose stress toy.
Not only is it cute:

But I'm also incapable of not poking it at least once every ten minutes.

I don't even usually *do* stress toys...